The funky vintage Kent State sweatshirt has a ton of people really pissed off. Not only a visual eyesore, the faded, strategically-ripped sweater looks as though it was covered with bloodstains. Truly a politically incorrect fashion nightmare. 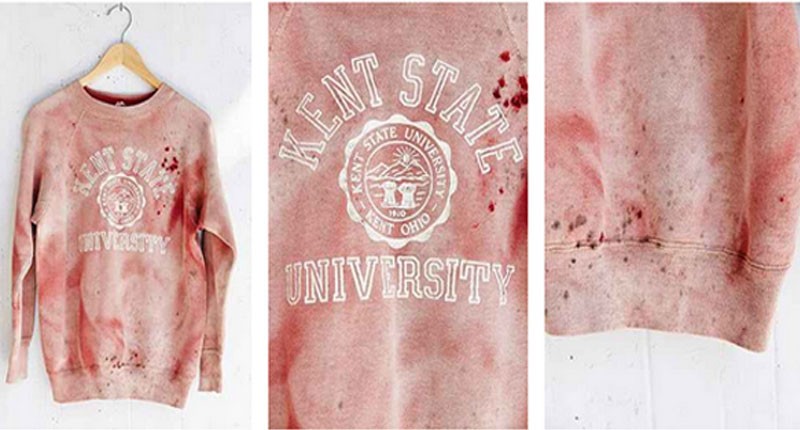 The debut of this foolish sweatshirt totally evoked memories of the shooting known as the Kent State Massacre circa 1970, when the Ohio National Guard opened fire on unarmed college students, killing four and injuring nine.

The company issued an apology on Monday, stating: “There is no blood on this shirt nor has this item been altered in any way. The red stains are discoloration from the original shade of the shirt and the holes are from natural wear and fray.” Well, thank god no one was physically hurt in the making of the sweatshirts, only emotionally.

The clothing company has a track record of offensive merchandise including gun-shaped Christmas ornaments and a shirt that featured an embroidered six-point star that reminds some of the Holocaust. Such rudeness.

Urban Outfitters has gone full hipster on this sweatshirt. What’s more hipster than a sweatershirt that nobody wants! Okay, yeah…Urban Outfitters was just trying to be “hip”, but it really put its hipster-shod foot in its mouth. The brand geniuses at Urban Outfitters recall violent events in history in a lame attempt to be hip. What’s even worse, the sweatshirt was offered at $129. I’m having none of it.

PS. I don’t even wear a polo shirt with an alligator, sans blood.