University of Colorado Ends the Party

University of Colorado at Boulder is trying to call the police on their own party. The Boulder Buffalo are attempting to herd their incoming students away from their party school image through their new marketing campaign.

The campaign’s tagline is to “Be Boulder” which will formally start in December. The campaign will focus on the intellectual aspects of the University of Colorado like academics, school’s researchers, astronauts, entrepreneurs and away from the school’s raging keggers run by the pot-heads. 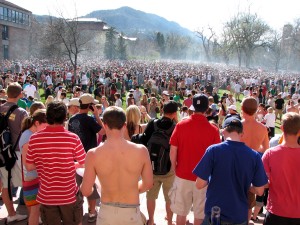 CU’s director of strategic marketing Jon Leslie hopes that this campaign will influence those people who do not know much about the university and how they perceive it because there is absolutely no hope to persuade those who are familiar with university. Leslie’s marketing campaign expects to increase alumni participation. CU is currently at an 8-percent alumni participation ranking them dead last in the Pac-12 Conference.

In initial focus groups, CU officials asked contributors what celebrity they identify with the university. Main responses included scholars like Charlie Sheen, Lindsay Lohan, and a few astronauts sprinkled into the mix. The response really reflects the campus which one hosted an enormous 4/20 festival that attracted more than 10,000 pot smokers.

Boulder was ranked third on Playboy’s list of top 10 party schools in 2013. I don’t know about you, but a simple pun for a tagline won’t distract me from the reeking smell of weed that clouds their campus. For that, Jon Leslie, I wish you good luck.