Slurp. The Share a Coke promotion is totally quenching thirsts of consumers, with a 19% lift in sales for 20-ounce bottles year-over-year.  That’s a lot of coke sharing.

First, the soda syndicate teamed up with JetBlue to pull off a subway stunt at Penn Station. A special vending machine was set up that dispensed two Cokes whenever someone bought one. People were encouraged to hit the bottle with a stranger with messages like “Share a Coke for Humanity,” “Share a Coke with a New Friend” and “Share a Coke with Anybody.” 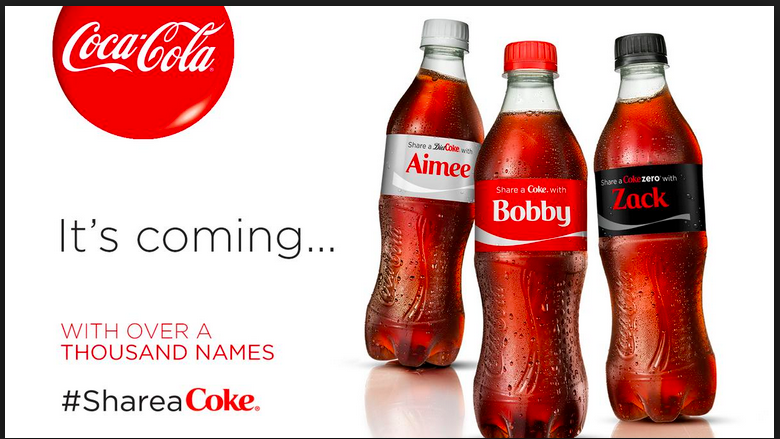 Surprise, surprise that wasn’t it because if you played along, JetBlue rewarded each act of generosity with two free, round-trip tickets. According to FastCoCreate, 150 people used the machine and about 70% decided to share their soda with a stranger.

It seems like Coke has caught lightning in a bottle with the “Share” campaign because they’ve experienced a 19% lift in sales for 20-ounce bottles year-over-year. According to chairman and CEO Muhtar Kent, “In the markets where we are investing more with better quality, we are seeing better performance. Marketing, along with solid execution by our bottling partners, is driving top-line growth across our emerging, developing and developed markets.”

Given the success of this campaign, it’s no surprise that they keep coming up with other executions. Another recent extension included a partnership with Google. The digital “What’s in a Name?” feature asked users to name drop and add a theme like “adventurer.” A virtual bottle would then appear with the name and a stream of facts about that name.

However, everything isn’t all sunshine for the soda maker. The Diet

Coke brand seems to be turning into a can of worms since their sales dropped 7% in the second quarter. Execs have to be seeing red because this slide has allowed Pepsi-Cola to pass Diet

-Coke and become the number two best-selling soda brand in the US.

While Coke is having success due to the “Share” campaign, it’s really surprising the Diet

Coke – also a part of this campaign – is giving a bad name to the brand overall. I guess the diet side really needs to find it’s genie in a bottle.

I think overall this is a really cool campaign that’s effective because it borrows direct response techniques and appeals to people directly. But I think after a while having a drink with your name literally on it will start to feel stale, so they should think about canning this for something fresher soon.