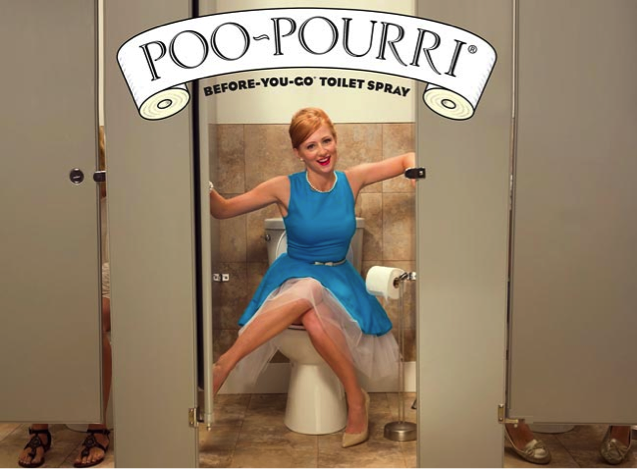 “Our business is to make it smell like your business never even happened” That’s slogan of PooPourri, the bathroom spray that’s actually meant for the toilet bowl, not the air around it. Think of this spray as a preventative measure; it supposedly creates an odor blocking film on the surface of the toilet water that traps bad odors and releases pleasant scents.  Hmm.  A slogan that’s meant not to stink.

Traditionally, the toiletries industry has taken a gentle approach to advertising with big fluffy bears and adorable puppies circumventing the very visceral reality of the product’s purpose. PooPourri has completely reversed this precedent by taking what happens in the bathroom head on with unabashed potty humor.

Fully engaging its customers, PooPourri also has a hilarious and open social media presence, where they encourage followers to tweet their notable poop experiences. This more direct approach appears to be rubbing off on usually timid competitors, with Charmin’s twitter account recently posting: “If you sprinkle when you tinkle, be neat and WIPE THE SEAT. #CharminCourtesy”

The success of the campaign thus far has been significant financially. “Girls Don’t Poop” is currently at about 25 million hits and the company’s sales are up by 90% in 2013. Like the director of creative at PooPourri said, “Nobody doesn’t poop”.