Blog Mike Myers and Brother Save The Day for Sears

Mike Myers and Brother Save The Day for Sears 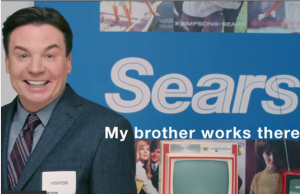 Did you know Mike’s brother works for Sears? Go figure. Well, a Sears ad featuring comedian Mike Myers and his older brother, a longtime employee of the struggling retailer, has racked up more than 1 million hits on YouTube since it made its debut in Canada earlier this month.

In #brotherthatworksforsears, Mike is hardly the star – after all he’s just “Peter’s brother” according to the commercial.

Peter is the #brotherthatworksforsears, and yes, this commercial comes with a hashtag.  Sears is aiming at siblings everywhere, trying to bring Sears Canada back to life with a campaign full of brother and sisterhood – because Mike’s brother really does work for Sears Canada.  In light of their looming mountain of financial strife, Sears Canada is looking to try anything – even if that means quoting things like “alien U.F.O sex diet”.

The ad carries an air of sympathy as it repeatedly acknowledges the struggles of Sears Canada. Like when Mike enters the frame by concernedly asking “Is Sears Canada going away?”  The Ad relies on genuineness, like the recent Dominoes advertisement that embraced failure as part of the creative process. As Mike meanders through the Sears Canada corporate headquarters with Peter, the two trade punches (albeit not literally – although that would have made for some great entertainment).  In the end Mike comes up with a variation of the new Sears Canada tagline “My Brother Works There (At Sears)”. And now that’s how a hashtag is written, folks.

The Myers’ brothers actually have a third brother. Maybe he works at Walmart.