Just For Men Beard and Mustache

Just for Men signed on this year to sponsor the National Beard and Mustache Championship, which is being held at the House of Blues in New Orleans. The Competition has been around for 17 years, but this is the first time the vaunted hair-coloring company has lent its support – and it seems the once-discreet brand is no longer so shy about getting rid of that grey. 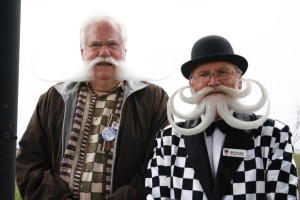 Just for Men has been increasingly active in sponsorships lately. Just last month, it partnered with the opt-in activation platform Smiley360 by inviting mustachioed and bearded bros to submit photos of themselves to its Facebook page. Smiley360’s page got over 1,000 submissions and 20,000 votes, and a group of semifinalists were subsequently asked to submit videos starring their exceptional facial hair. Just For Men ultimately gave winner Fred Knowles an all-expense paid trip to New orleans to compete in the nationals.

All this suggests that the subject of male hair coloring is not nearly as taboo as it once was. Gone are the days when the company’s TV spots would pitch their products with the sheepish “It looks so natural, no one can tell” tagline. While the product was once seen as the province of divorced men trying to reclaim the virility of their youth, men are now embracing hair coloring as a positive expression of their individuality. Elisa Golim, who works on the brand’s marketing team, remarked that “fifteen years ago, coloring gray was considered a feminine thing to do, but now it’s a completely new universe. Men are not afraid of the topic anymore.”

It remains to be seen whether men will soon be lining up at salons for color treatments, but in the meantime, Just For Men seems poised to benefit handsomely from these changing social mores.