Diet Coke: Be Sleek and Skinny Just Like Taylor Swift

Diet Coke says: Be Sleek and Skinny Just Like Taylor Swift.  They are touting this with their skinny new “Sleek Can.” 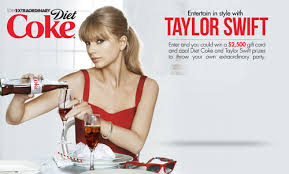 “If you’re lucky enough to be different, don’t ever change.” That’s the message Taylor Swift has written all over Diet Coke’s slender “Sleek Can,” in a hilarious instance of mixed messages. If this can was being honest – and I prefer an honest soda can – it would say, “If you’re trying to lose weight but really can’t give up soda, might as well try this blend of calorie-free fake sugars created in a lab.”

Problem number one cropped up in my head immediately: Is Diet Coke aiming for the right market when they enlist Taylor Swift? I would think Taylor Swift would attract teenage girls, yet about half of all diet sodas are consumed by people over the age of 40.

Perhaps they’re aiming for young, body-conscious women who want to be as skinny as this can? Trying to expand their market reach through the magic of Taylor Swift? I guess crazier things have happened.

Swift isn’t the focus of the entire campaign, as Diet Coke is also rolling out new video spots. In one, a woman on an airplane cracks open a can, only for the boring flight to turn into a trendy party. This is just a blatant ripoff of the ad campaign Heineken has been running for the last year or so.

I’ve seen people drinking Heineken at parties before, so that makes perfect sense. For Diet Coke to essentially run Heineken’s ad campaign, replacing beer with diet soda, is more than a little bit forced. Nobody drinks a Diet Coke at a party. The lack of creativity here is pretty shameful.

Diet Coke’s sales have been floundering for awhile. This attempt to revive business just feels contrived. Modern consumers are smart enough to know that a Diet Coke isn’t going to suddenly make their lives exciting.