Blog Butterfinger Sticks It To Reese’s

Butterfinger Sticks It To Reese’s

Doh! Reese’s is about to get some sweet new competition from Bart Simpson-backed Butterfinger. The Nestle brand scored a Super Bowl spot plugging a new peanut butter cup version of the awesome candy bar that will launch in January.

Butterfinger is confirmed to make its first Super Bowl debut in 2014, marking the first time for Nestle USA to advertise one of its brands at the most watched nationally televised sporting event in the country. 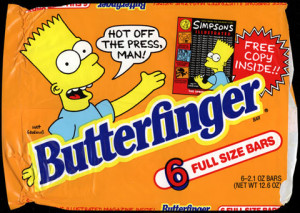 The Simpsons and the Butterfinger – the connection may not be as obvious as it once was, but during the early days and in fact the first decade of their existence, The Simpsons were inexorably tied to the crispity, crunchety, peanut-buttery treat.  But this year, longtime cartoon pitchman Bart Simpson didn’t make the cut.  Instead the brand opted for “something much more broad than going back to the Simpsons, which are a little old,” said Butterfinger Brand Manager Jeremy Vandervoet.

The spot will position the new peanut butter cup directly against Hershey’s Reese’s cup which currently owns the spot as the top-selling chocolate, devouring 11.5% of the market share and generating over two billion in profit last year alone. Nestle is using the Super Bowl as a way to break ahead and close this gap, where Mars has been know to steal fan share.

This expansion of the Butterfinger is the largest planned market penetration tactic in the history of the candy bar; not known for their advisements, dedicating a mere $9 million to media driven promotions compared to the $82.2 million Reese’s spends on advertisements.

As for Bart’s role being cut, well he once said it best:   I never thought it was humanly possible, but this both sucks and blows.