Blog America Loves a Wife-beater (Actually, So Does England)

America Loves a Wife-beater (Actually, So Does England)

You’ve got to love a wife-beater. But what is up with the rude name? 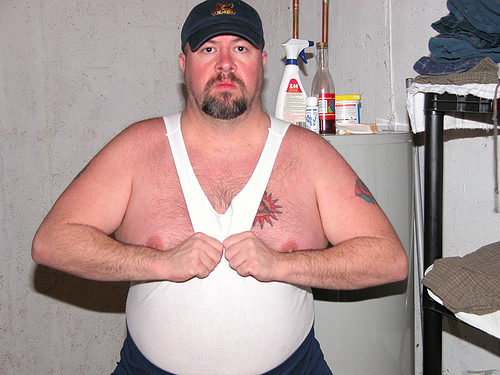 After all, naming a thing is a great responsibility. That’s true whether it’s your boy, Elroy, your country, or your sled.

So, in this #metoo era, why do even fashionable women refer to “wife-beaters?” For that matter, why did people call them that in a prior era?

You know what a wife-beater is. Perhaps you call it by another name – athletic shirt, tank top, singlet, muscle shirt. Folks who hated Italian-Americans had even more offensive terms for them. These fully utilitarian shirts have acquired this name because they were associated with (depending on the etymology you uncover) despicable acts committed by men wearing them. I can’t find the image, but apparently in 1947 a Detroit man named James Hartford, Jr. beat his wife to death and was photographed for the local newspaper wearing such a garment. The caption below is said to have been, “Wife beater.” (Most accounts also mention it was stained with baked beans, but oddly the baked bean industry escaped blame.)

The usage apparently persisted, accelerated by such pop culture connections as Marlon Brando in A Streetcar Named Desire, assorted wiseguys, and perps run down on Cops.

So, these shirts have a branding problem.

You know who else had a branding problem? Enron. Jack in the Box. Chipotle. Tylenol. Wells Fargo. Equifax. The Weinstein Company. Bill Cosby (and consequently, Jell-O; much like Subway and Jared Fogle). Jack in the Box, Tylenol, and Subway have recovered, mostly by doing the right things. Tylenol pioneered tamper-proof packaging and told the world about it. Jack in the Box cooked its burgers longer and changed meat suppliers. Subway changed its ad approach and fired its pedophile spokesperson. But these problems have nothing to do with the companies or their brand names. Instead, they’re the result of crimes and errors that have tainted the brand.

And, since I am on a rant, you know what they call Stella Artois in the UK? “Wife-beater.” For the same reason. Aren’t you glad that you’re not a company that sold the weapons used in a high school shooting? (Actually, one, American Outdoor Brands, used to be known as Smith & Wesson. Maybe they’ll be rebranding again.)

But naming things?  Oy, that’s the rub. For instance, there’s the proposed name for an Internet company that planned to catalog the Internet and make it easy for users to find what they wanted. We could be “backrubbing” the Internet right now. Instead, we Google it. Who is we? Don’t get me started.

Would computers and office machines from Computing-Tabulating-Recording Company have been as cutting edge as the groundbreaking ones sold and manufactured by IBM?

Would it do be instantly clear you were moving your money if you used Confinity as opposed to PayPal?

And then there are the brand names that were perfectly fine… until.

I mentioned Weight Watchers above. Trust me, I have not been to a Weight Watchers gathering. One of its competitors was a candy that contained an appetite-suppressant. It sold well, supported by print and television advertising – right up until an epidemic called AIDS was identified in 1981. The weight-loss candy – called Ayds – never recovered. Not even after rebranding itself Diet Ayds.

Belgian chocolate is among the best in the world, right? Who wouldn’t want a luscious slab of it? Well, apparently people afraid of terrorists. Sadly, confectioner Italo Swiss changed its name because it was no longer connected to either Italy or Switzerland. It picked the magical name ISIS. Unfortunately, this happened just as the terrorist group ISIS began beheading westerners in its attempt to gain dominance over the Middle East. The ISIS brand didn’t even last a year before changing again – to Libeert, named after the company’s director. (Here’s hoping that nobody related is named “Hitler.”)

Makes you wonder what other errors in the making are out there.

Actors go through this, too. Is a guy named Marion Morrison as true an American as “John Wayne?” A lot of people claimed to be SPARTACUS, but would you have been as moved had the actor playing him gone by his birth name of Issur Danielovitch Demsky? (Fewer extras would have been needed, though – “I am Issur Danielovitch Demsky” is quite the mouthful.) Would the American West have seemed as wholesome in movies had it been defended not by Roy Rogers, but Leonard Slye? (And what about his hamburger restaurant? Would you think it was on the up-and-up?)

And yet, some of today’s performers have brands that are simply… Ludacris (as in Ludacris-ly successful). In sports, one of baseball’s best hitters is a guy named Mookie Betts (which sounds like what Las Vegas veterans call guys who play craps badly). We’ve even had presidents named Grover, Ulysses, Chester, Millard, Rutherford, and Barack, which gives hope to branding anyone with a name that’s different from the average.

So, wife-beater shirt, your brand may be established, but you can rename yourself. All it will take is a solid social-media plan, a well-known spokesmodel who built a career defending women, and the gross domestic product of California.